Longueville as featured in Green magazine

The garden of this striking Sydney project says as much about the home’s architecture as it does the story of the family living within it.

As this visually-striking house was gradually emerging from the ground in one of Sydney’s sedate Lower North Shore suburbs, the builder grew tired of fielding questions and comments. “Is it a shed or a factory?” passersby would demand to know. But now that the metal-clad house is finished and climbers are beginning to clothe parts of the building, any identity confusion should be gone.

“We wanted the garden to be a softening element as there is a lot of stone, steel and hard corners,” says Mark Bell, of Bell Landscapes. “It is one of those buildings that is polarising: you either love it or hate it, but I guess that’s great architecture. The vines are starting to trail up the mesh and when they are in flower, they look amazing.”

As well as working to soften the building’s metal-clad form, the climbing plants were also (somewhat paradoxically) positioned to accentuate the house’s sculptural character. “The house is on a corner with tennis courts across the road, so it’s a very exposed, public site,” says architect Clinton Cole from CplusC. “And, because of that, we definitely took the opportunity to explore an artistic, sculptural response.”

He likens the form of the building to a machine, perhaps even a locomotive, and the fire pit – housed in a small courtyard cut out of the southern side of the building – is central to this idea. “Seeing the flickering orange flames of the fire pit lighting up the blue-flowering vine on the courtyard walls reminds me of a combustion engine,” he says, “and the orange-flowering vine at the rear of the house, uplit by the garden lights, is almost like fire breathing out the back.”

The new L-shaped building replaced a decade-old house that was a pastiche of styles and had been poorly built. Little could be salvaged apart from a Jetmaster firebox and some tapware – even the pool in the rear courtyard could not be reused as it was leaking. Now a narrower pool, over-arched with a two-storey metal pergola, fills that space. And here, too, vines are being trained to provide dappled shade and a green arbour outlook from the rear of the house.

“The thing I love about this house is that it has such great flow and vantage points,” says Mark. “From pretty much everywhere in the house you can look out and see garden.”

At the other end of the open-plan living area, a wall of glazing allows views onto the front, east-facing garden. Here the landscaping was kept deliberately low-key so as not to compete with the house’s powerful and arresting front elevation. Bound by sandstone walls (another salvaged element from the earlier house) and flanking a path that leads from the gate to the front door are two large areas of lawn, providing the owners’ three teenage children with somewhere to romp. Running alongside both the paved path and its decked-walkway continuation to the front door is a narrow pond that continues under the house and re-emerges on the other side. Filled with flowering waterlilies, and soon to be home to flickering goldfish, this linear waterway defines the house, separating the private parents’ wing from the public zone.

The water feature was introduced for multiple reasons, explains Clinton. “The house has only glimpses of the harbour bridge from upstairs. But they are not amazing views so it was about creating outlooks within the house, but also for allowing passing breezes to be cooled by the water. Then there’s the sound of the water falling from the two little waterfall ends to create some white noise to drown out the traffic, and there’s the whole idea of fish and luck and water. The family have been living for years in Hong Kong and so a lot of the ideas came from that Chinese/Hong Kongese cultural heritage.”

Because the family was returning to Australia after a long time away, the owners wanted both the house and its garden to contain identifiable Australian elements, such as the corrugated metal cladding and the many new native plants and trees, including grass trees (Xanthorrhoea australis), kangaroo paw (Anigozanthos flavidus), coastal rosemary (Westringia fruticosa), mat rush (Lomandra “Tanika”) and tuckeroo (Cupaniopsis anacardioides).

The only part of the garden not to be predominantly planted with natives (besides the climbers, which are all exotic species) is Mark’s favourite space – the narrow strip along the southern side of the house. Here Clinton asked for “a weird and wonderful kind of moonscape” to draw people in.

“It was a tricky one to initially get my head around,” admits Mark. “But I knew he wanted something that was a contrast to the rest of the garden, with unusual plants and lots of different textures.”

Mark chose a mix of variegated grasses (Liriope “Stripey White”) and silver-blue and green succulents (Kalanchoe and Crassula species) to border a meandering path of crushed granite edged with a hard “mulch” of river pebbles.

The blue, silver and grey-green foliage was chosen to relate to the corrugated iron, and the crushed granite path and river pebbles complement the sandstone fence. As Mark says, in this garden everything relates back to the architecture. 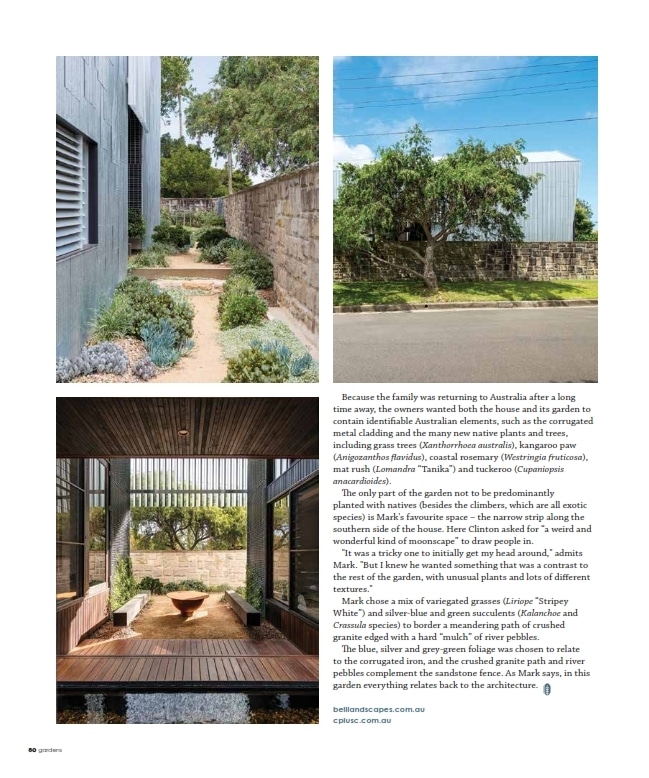