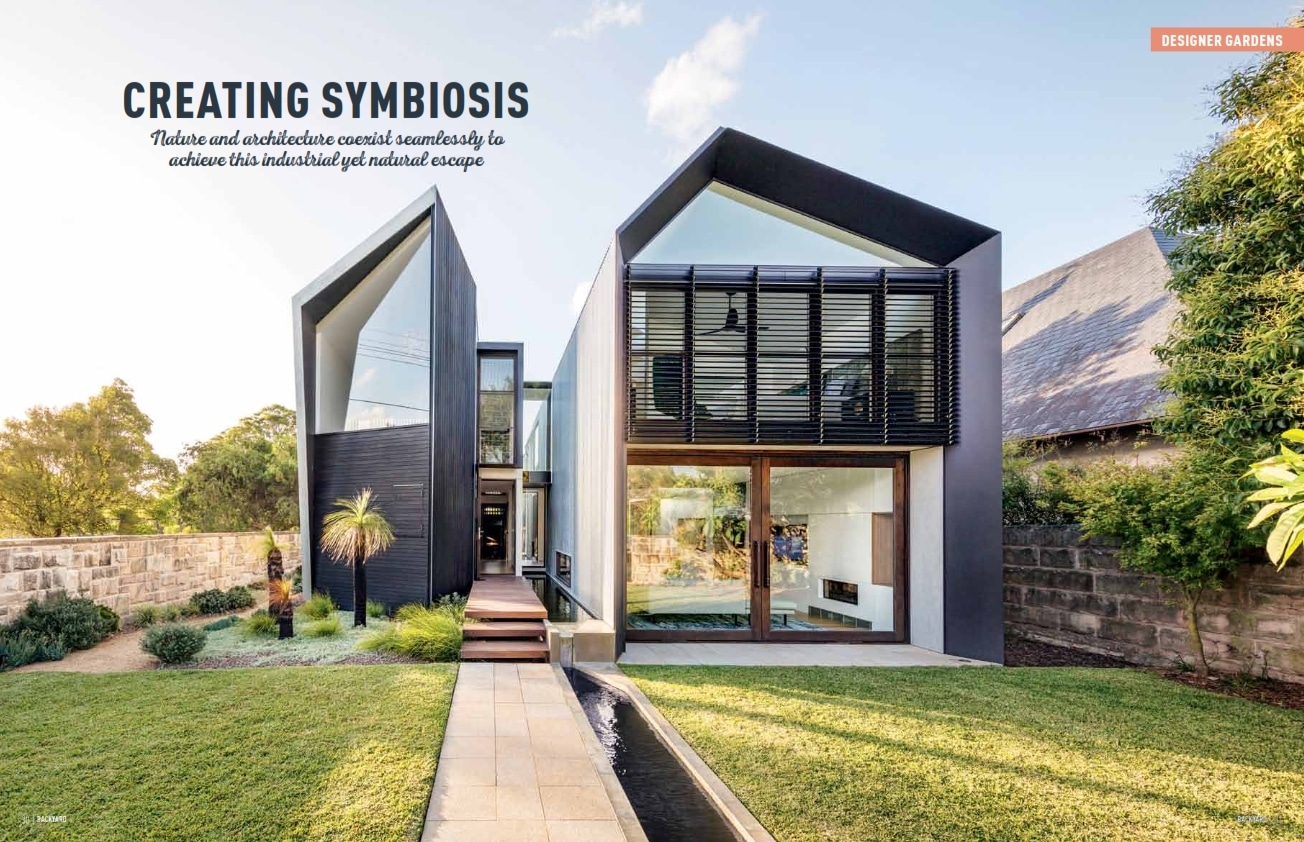 Architectural marvels rarely have the pleasure of being adorned and softened by such a beautiful array of foliage. However when Bell Landscapes and architect Clinton Cole of CplusC teamed up, they created an earthy, low maintenance escape that both complemented and served as a contrast to the surrounding landscape, providing a strong relationship between the built and natural environment.

“We wanted the built and natural elements to be seen as one, rather than being viewed as separate,” says Mark Bell of Bell Landscapes. To create this symbiosis, Mark and his team divided the planting design into two parts – one theme focusing on traditional natives such as floral climbers that soften the home’s strong industrial feel, the other utilising succulents with blue, grey and silver tones to complement the home’s build elements, echoing the steel and iron hues.

By marrying both elements, Bell Landscapes was able to use provisions within the overall design, such as the use of wire mesh along the first-floor boardwalk above the swimming pool, and various structures attached to the building’s exterior facade for plants to grow on and spread – so the asymmetrical build becomes part of the landscape.

“We carefully selected plants with foliage colours, shapes and textures that visually connected to the materials used in the project,” says Mark. The chosen climbing plants were twisted around structures in the firepit area, over the pool, and up the back of the home to create a dramatic contrast between the plants’ bright pink, orange, white and blue flora and the home’s stark exterior.

“The long-term view is that as the corrugated iron very slowly corrodes over time, it will create a beautiful patina that the foliage and flowers, produced by the climbing plants, will contrast with against the exterior of the home,” says Mark.

This magnificent marvel didn’t come without its challenges. The site was built on very heavy clay, making free drainage a problem. Mark and his team solved this issue by mounding the gardens, both helping the succulents survive and also adding interest to an otherwise flat garden bed. Decomposed granite was used to make a striking side passageway, usually an afterthought for many designers, but this was made a main event by contrasting it with the garden’s river pebble mulch and visually connecting it with the home’s sandstone walling. Grass trees featuring striking black trunks were planted in the front garden to introduce a strong vertical element to the garden and also to heavily contrast with the charcoal timber of the home’s front facade.

“I love the planting palette, the curved path and the organic feel of this garden and how it relates to the corrugated iron and sandstone wall,” says Mark. “A combination of Australian natives and hardy succulents, both are very low maintenance and well suited to the Australian climate.” For the decking and boardwalk areas, Corymbia maculata (spotted gum) was used, with Thuja plicata (western red cedar) used for the home’s cladding. All existing sandstone was repaired and retained around the perimeter to keep with its design nod to nature.